Press release: Towards a European research infrastructure for heritage science 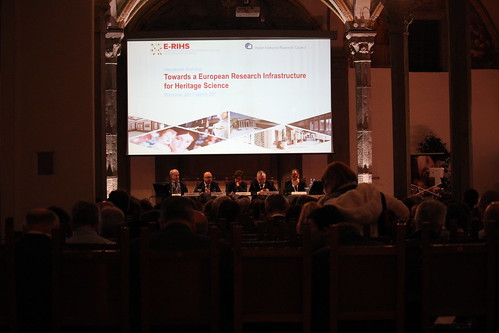 Today (29 March 2017), in Florence, at the Chapter House of the Redi Military Station (former Maglio Monastery), has taken place the international workshop ‘Towards a European Research Infrastructure for Heritage Science’; this, representing the starting event of the preparatory phase ‘E-RIHS PP – European Research Infrastructure for Heritage Science – Preparatory Phase -‘, the European research infrastructure for science on cultural heritage, one of the six new projects entered the ESFRI Roadmap (European Strategy Forum on research infrastructure) in 2016 under Italian leadership. For this launch, the European Commission has approved, within the Horizon 2020 program, a loan of EUR 4 million for research and development. The project is funded by the EU and supported by Miur, Mibact, Mise, sponsored by the City of Florence and the Tuscany Region, with the support of the Foundation of Florence Savings Bank (Cassa di Risparmio) which has committed to supply a building devoted to host E-RIHS headquarters (the Redi military Station), in case Florence actually became its permanent site.

Prof. Massimo Inguscio, President of the Italian National Research Council (CNR), announces that “Italy, with CNR, is the leading partner of the European Research Infrastructure for Science Heritage Preparatory Phase, whose consortium counts 15 member-countries plus Israel”. “For our country, three ministries are supporting the initiative: Education, University and Research (Miur), which is the reference Ministry, the one for Cultural Heritage and Tourism activities (Mibact) and the one for Economic Development (Mise). E-RIHS purpose is to build a single cutting edge world-leading infrastructure in the research field of cultural, natural and archaeological heritage, with laboratories and centers scattered throughout Europe, able to provide access to high-level scientific instrumentation, innovative methods and databases. The city of Florence – with the support of its City Hall, and Tuscany Region – is the European candidate to be the hub of this global research infrastructure led by Italy which will gather scientific excellences working within the area of cultural heritage in Italy and Europe.”

Part of E-RIHS are also the INFN-National Institute of Nuclear Physics (IT), the ENEA-National Agency for New Technologies, Energy and Sustainable Economic Development (IT), the CSGI-University Consortium for the development of large interphase systems (IT) and the national INSTM-Inter-University Consortium for materials science and technology (IT). Key players of the emerging European infrastructure are also central institutions such as Mibact, or, on the front line, the OPD-Opificio delle Pietre Dure (IT) based in Florence. Infrastructures included in the project are also prestigious research institutions such as the Prado Museum in Madrid (ES), the National Gallery of London (UK), CNRS – Center national de la recherche scientifique (FR), CSIC- Consejo Superior de Investigaciones Científicas (ES), the FORTH-Foundation for Research and Technology (GR), the German Archaeological Institute (DE) and Synchrotron SOLEIL (FR).

E-RIHS combines – according to an integrated approach to science on heritage (Heritage Science) – skills such as physical methods applied to cultural heritage, new materials for the preservation and restoration, digital archeology, and the expertise of scholars and professionals such as archaeologists, art historians, paleo-anthropologists and paleontologists, restorers, preservation scientists. In order to address the issues pertaining to cultural, natural and archaeological heritage in a cross-curricular perspective, the infrastructure intends to aggregate hard sciences and humanities. E-RIHS will be organized into four platforms: MoLab for non-invasive analysis of the assets to achieve in-situ with mobile tools; FixLab made up of large-scale infrastructure such as synchrotrons, neutron sources, accelerators for the dating and characterization of materials of interest; ArchLab which includes most unpublished physical archives (storages) contained in museums, galleries and European research institutions; DigiLab for direct access to databases and digital libraries.

The operational phase will last three years (2017-2019), during which the main structure’s functioning will be set: governance, budget plan, regulations and logistics, legal and operational headquarters of ERIC (the European Infrastructure Consortium research) whose creation procedures  have been initiated by the European countries involved. ERIC is a special legal entity acknowledged by all EU member countries and those associated. This includes member states joining at a governmental level, which appoint their national scientific implementers.

As a candidate, the city of Florence offers the Redi military station to host the European hub of this infrastructure: nearly 3,000 square meters will be made available for this purpose thanks to the Fondazione Cassa di Risparmio support. The Redi station is a healthcare facility, currently in use of the Military Geographic Institute, within the framework of the agreement between the Ministry of Defense, the City of Florence and the Governmental Estate Agency for the exploitation and enhancement of some military buildings based in the Florence territory.

Who: E-RIHS PP
What: preparatory phase of the European research infrastructure for science applied to cultural heritage
For further information: President Secretary, presidenza@cnr.it